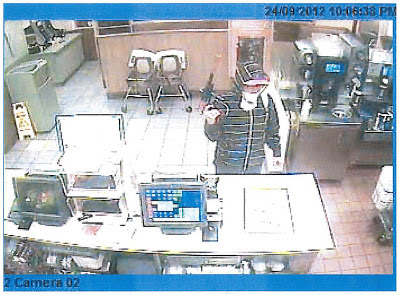 
He was wearing a disguise, dark colored clothing, carrying a backpack and a black imitation-long barrel handgun.

The unknown culprit demanded money from the till however was denied and was subsequently chased off by employees.
The unknown culprit was last seen headed in the direction of the Sandman Hotel. Police patrols of the area failed to locate a suspect.

On September 24, 2012 at approximately 2200 hours a Caucasian Male, believed to be in his early twenties, wearing a disguise and dark colored clothing with a distinct dark hoddy with white horizontal stripes, carrying a backpack and a black imitation-long barrel handgun entered the Revelstoke McDonalds Restaurant located at 1880 Trans-Canada Highway and demanded money from the till.

The unknown culprit did not get any money and subsequently was chased off by an employee.